Uncle Rutilio and his family arrived at the Jairo Rodríguez Municipal Physiotherapy Clinic in Mercado Concepción, Villa Nueva, Guatemala on a sunny Monday morning. Uncle Rutilio and his wife felt that he would be confined to a wheelchair for the rest of his life, but after 45 minutes, he insisted on walking out of the clinic. A profound turn of events happened that Monday morning and continues thanks to educational awareness and increased access to rehabilitation medicine, a collaborative physical therapy team, a caring family, and a determined patient.

A year prior to Uncle Rutilio’s arrival at the clinic, he was diagnosed with Parkinson’s Disease. Parkinson’s is a chronic and progressive disease affecting one’s movement and ability to perform daily activities. As the effects of Parkinson’s set in, people often become hesitant and reluctant to move. They are not sure what may happen if they try or fear further immobility or falls. Many times, they begin to withdraw from society and stop engaging in the community around them. However we, as physical therapists (PT) and compassionate people, can change this reality through awareness, education, and increased access to quality rehabilitation medicine. The ability to actuate change also increases when we come together to develop and share ideas for sustainable access and care around the corner and around the world. 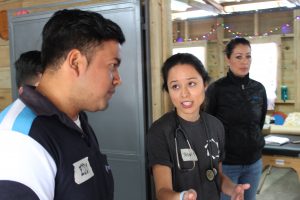 Life is a culmination of the daily choices we make, the sharing and giving, and the ripple of each action. During family Thanksgiving dinner in the United States, Uncle Rutilio’s family shared his diagnosis and continued declining health. Sidney, a 2nd year DPT student at MGH Institute of Health Professions (IHP), listened to her uncle’s story. As a physical therapist student, she understood that movement and treatment could improve his quality of life and hoped to be able to help him receive treatment even from afar. By no coincidence, Sidney knew just the place where Uncle Rutilio could receive the treatment and care he deserved. She had chosen the IHP physical therapy program because of its global health collaborations and was preparing to journey to this location in Guatemala with Move Together and the IHP program. Her pursuance and desire to maximize lives through global health was coming together in a very real way as she prepared to collaboratively treat patients in a global setting and share this opportunity of care with her own family.

When Uncle Rutilio arrived at the clinic, PT students, professionals, and interpreters based in Guatemala and the U.S. were collaboratively treating patients in the sustainable and thriving physiotherapy clinic constructed together two and half years ago by the Villa Nueva Municipality and Move Together. Four members of the team were honored to share in Uncle Rutilio’s treatment: Eddy, a Guatemalan PT student; Jane, an IHP professor; Sidney; and her fellow 2nd year PT classmate, Casey. They began by sitting down with Uncle Rutilio and his family to hear his goals and assess where he currently was.

When they sat down with Uncle Rutilio, Sidney observed the difference in his demeanor from when she saw him 10 years prior. He was sad: different from the smiling person she had previously known with a softspoken voice. However, by the time he left the clinic, Uncle Rutilio had an entirely different demeanor and was back to the smiley man he was before. He simply radiated with pure joy and happiness.  He was speaking louder with more confidence and able to walk and move more than he had in previous months. 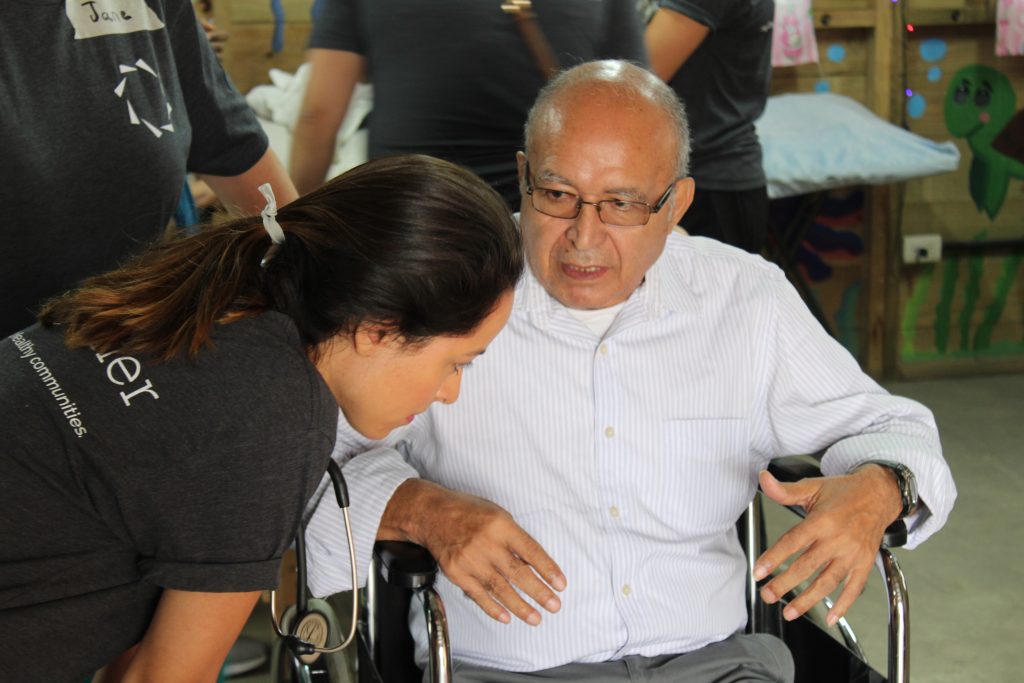 This profound transformation resulted from the clinicians meeting him where he was and appropriately challenging him in a safe environment. Jane and the other clinicians developed a trusting relationship with Uncle Rutilio that allowed him to feel safe and open to pushing limits he had previously avoided. Smiles and hope filled the clinic as amazing strides were made in a few short minutes. Uncle Rutilio, energized and confident, chose to walk out of the clinic that morning, to continue efforts at home, and to return for additional education and treatment. A month after visiting the clinic, Uncle Rutilio excitedly shares that he has not fallen once since his visit and walks daily around the neighborhood!

This is one of many stories that remind us how the power of awareness, education, and access can make a huge difference in the life of another, their family, and community. It exemplifies how an assessment, routine intervention, and moment of encouragement makes a rippling impact. The simple notion of movement brings a new world of possibilities. We are truly better together spreading the knowledge of the benefits of movement for healthier communities and a healthier world.

Hear Dave & Alice’s story of how increased access and awareness is transforming their lives in Bend, Oregon through our Pro Bono Incubator recipient Destination Rehab.